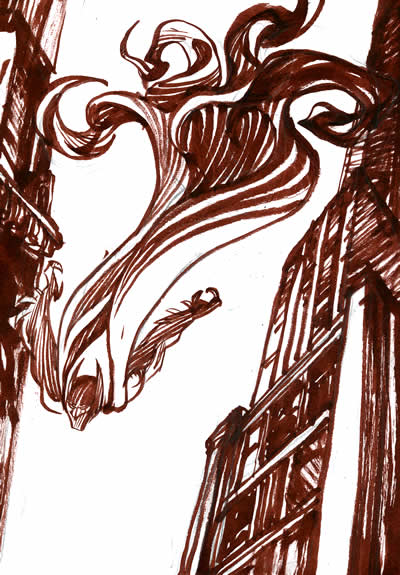 A large package showed up from Belgium the other day, mystified Iopened it to find a copy of “Docteur Strange et Docteur Fatalis”, a paperback reprinting of a graphic novel that I did the finishes over Mike Mingola, Hellboy creator. The owner wanted an autograph and a drawing, this is the drawing. I probably should scan some of the pages too.

Mike hadn’t broken his style down into his current look yet, although his thumbnails were there, he just hadn’t figured out how to finish them yet. He had planned to ink the graphic novel himself but didn’t have the energy and time and wanted to get on with something else. So he asked me if I would ink and color it. Hanging out together turned into working together who would have thought?

I used airbrush, pens, brushes, splatter, watercolor and gouche. Mikes layouts were delicate and spidery drawings, not really pencils but more then enough to lay drawing on. We where kids, living alone, talking hours on the phone about marvel and comics and office politics and trying to figure out how to get those Mobius little squiggly lines and get wild with drawing. looking at the batman drawing and the novel I can see why i don’t work in mainstream comics anymore. My line is just to wild.

Mike was the artistically conservative one, an office favorite and becoming popular but still a little weird. Hellboy wasn’t even a thought in his head at that point. I was being a commie and doing Martian Manhunter probably the weirdest comic DC ever published, and not quite sure where I was headed either.

we was kids then…