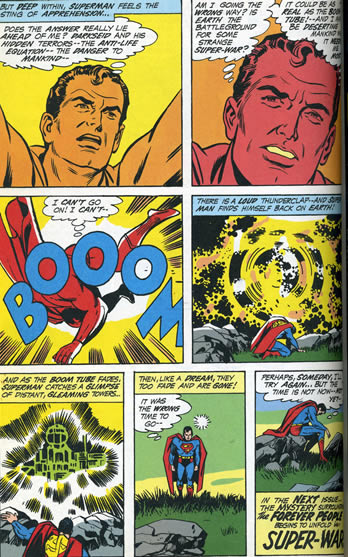 It’s hard saying drawing doesn’t matter in comics, so it’s hard to ignore how Jack’s work gets destroyed. The last page of Forever People 1 is one of those pages that makes you want to cry that Mike Royer wasn’t inking it. But lets look at Jack’s layouts.

Most of Jack’s comics move from shot to shot, rarely does he follow a sequence of time over panels but in the top tier he does that over the simple 2 squares. Superman is flying through the Boom Tube to see what exactly is going on in New Genesis and follow the Forever people, agonizing over if he should go there or stay at home and protect home. It’s a pause for thought a slowing down of time as he thinks and the second close up verges into the powerful not by the drawing but by the scale of the head.
Then BOOM in the second tier, the figure actually dominated by the lettering overlaying it, classic comics lettering that is sharp and angular making the Supes figure being thrown across the space feel even more rag dollish. After the actual action we get the swirling boom tube of kirby krackle. It’s a nice little bit of action juxtoposed against the close ups making the shift between the two feel more powerful by setting up contrast in the panels. The tight structure of the grid holds it together but the range of layout from tight close up to long special effect shot is huge all built into the 4 panels.
Then the closing tier is three panels, Jack does the closing of the Boom Tube with one of his standard overviews of a big effect, dropping the figure at the bottom back view of shoulders, I suspect it’s a standard approach he’s used a million times. It distances you from the scene so the isolated figure in the middle seems a little stronger and the last panel as SUpes collapses on a rock and ponders feels more powerful in the context of the page. There just mid range full figure shots which usually don’t have a lot of impact. But here the contrast between the extreme close ups, action and long shots allows you to stop and invest some emotion in the crappy drawing. Then shed a few more tears for some drawing lost to comics factory mentality.