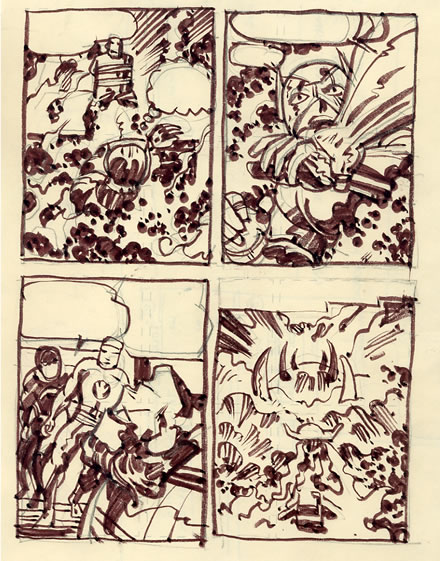 Centered Images
Jack had no problem doing centered images , putting his figures right in the middle of the panel. Panel 1 in split ith the foreground with the back of Orion in flames, at the top, dad is just wrapped in the pillar. It’s static except for the flow of flames around them that turn it into a panel flowing and implying a huge space between them.
Angled Images
Lightray pulls Orion out of the flames, shouldn’t this be more dramatic for such a huge close up they are just going inside. Inside to see the dead kid turned back to a human being. Jack gives us a sad face of the heroic kid at the end of it all, his face composed and calm. By once again giving us a large shape the figures are just walking in, just standing there doing nothing until we get the final panel.
Long Shots
And the fourth panel gives us the surging beast and another centered image pulling it out into a pure kinetic flow. The drawing, the details and the rendering don’t matter it is panel flow the choice to make it medium, close closer then long which give a flow to the gridded off page.