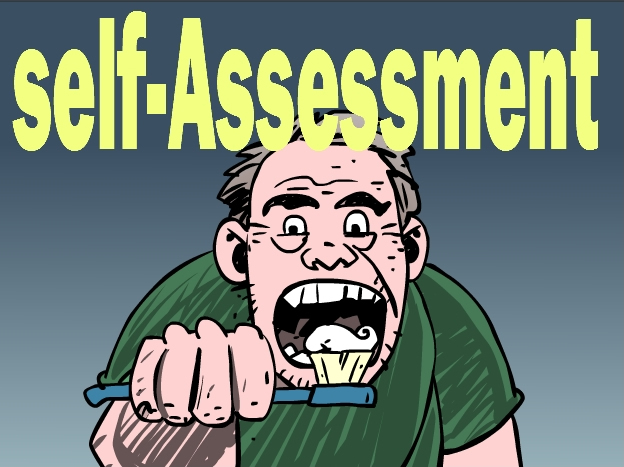 The struggle for an artist is to make sure the work gets ‘better”, closer to my “vision”.
The game assignment was to create a practice, like John Wooden did for basketball, that was simple and allows for immediate assessment.
The next step is to apply what I learn to art practice.

The three games I came up with were

Game 1: 2 Minute Teeth
The game was to brush 2 minutes a night which is what most dentist’s recommend. By dividing my mouth into left, right up and down, grouping inside and outside I end up with 4 parts. If I do a part inside for a fifteen count and the outside count for fifteen I get a point. So four points for two minutes of brushing means my night time brushing is being achieved.

Game 2: Night Stretching
To releave night time aches and pains from a days work and to sleep better.
Do three stretches, start with icing my feet for plantar fascias, a yoga stretch nd using a roller on my lower legs. All of these to counter some chronic pain that has developed over the years with MS. I got a point for each exercise.

This would improve my sleep by hopefully stopping cramping and plantar fascias, which is when the tendons between heel and ball of your foot cramp up.

Draw a person, from tv or during the day.
Draw a place, thing or other person from random reference
Draw the person reaction to whatever the second drawing is.

This is to work on my lack of character design and not thinking about characters in making a story. Not exactly a life skill but I am making up the rules here.

Assessment of the Games

2 Minute Teeth
I was trying to spend more time on brushing my teeth at night.
It’s not a physically hard task, but at the end of the day my patience to be a goody two shoes isn’t there and I often pay little attention.
This game has worked.
I’m spending more time on brushing my teeth then a casual late night swish.
The game’s structure makes me focus on the task at a time when I am fatigued.
This small challenge keeps me focused for the two minutes.

Counting to fifteen 4 times, is easier then doing one thing for two minutes.
Even if they add up to the same thing.

Night Stretching
They just didn’t happen after the first week.
It’s easier to sit and do nothing then exercise.
What didn’t work?
I start by rolling my feet over a plastic bottle filled with frozen water, simple and easy.
By not putting the bottle back in the freezer at the end, the next night couldn’t even start because there was no iced bottle.
So I quit
The yoga stretches, did my hip and the feet but provided no energy to continue.
And using the roller is so much physical work that at the end of the day it feels hard.

I’ve always been more interested in graphic flow and relationships between panels, not art school angst, super-heroic anxiety dynamics or political commentary.
But the reality is people care about characters not “art”.
So this is a good focus for me.

But the rules were so loosely I didn’t do this at all.
Having to pick a character at the end of the day is work in of itself.

The reverse shot, once again more choice, then I want to do at night.
The drawings, were they full sketchbook pages?
thumbnails?
Hand drawn panels?

There were no rules to say what was a win or loss.
My 2 Minute Teeth had a clear rule to work on character I need rules as clear as

“The game” requiring thought, focus and decision making at the end of the day,
so I went back to copying Kirby while watching TV.
Practice games should reduce the amount of thought and decision making so you just have one critical point that is being achieved at a time.

Actual art practice probably needs to be done during the day.

Make the task simple, clearly defined, and cut out decision making.
Having a win loss factor in terms of numbers is good

Especially at the end of the day I can’t make creative choices.
It needs to be for automatic skills and performance based work.
Must have a simple entry to start, especially if it’s low energy.
Art practice has to actually move to the day and into the “Tens”

Pick apart the area like character design so that you are working on small skills not large ones. Kathy Sierra says

“Deliberate practice is when you work on a skill that requires 1 to 3 practice sessions to master. If it takes longer than that, then you are working on something that is too complex.”

Define what the skill is I am trying to practice and master.

Red Chair
Goal: To stretch my legs and back at the end of the day for better sleep.
Goal is to get the old man’s body off the floor,in the chair, so he can veg out while drawing in his sketchbook.
Start on the floor, with no energy.
First move is twists in half lotus for a count of ten. 1 pt
Forward bends with twists, twice 2 pt.
Leg rolls front and back ten times 1 pt
Extra points for getting the ice bottle and rolling the feet.
So that if I forget to refreeze it it doesn’t just stop me from doing the rest of the exercises.
Voila I’m sitting in chair waiting for scotch&soda, slippers and sketchbook.

Goal: Keeping a consistent character with different reactions.
Steps
1 print out a strips work sheet for my sketchbook for seven days.
Pick one character to work on for the seven days. Use either a character from a project, a life drawing model or a comics character read that week
Do a side, front and 3/4 shot of the character in the first set of boxes.
Write a note in the middle panels using an event from daily journal in some form.
Use the Journal as a starting point to come up with ideas, feel free to improvise.
Draw panel 1 as a set up and panel three as a reaction to whatever is in the middle of the page.

Assessment:
Review seven strips, draw a new side profile and 3/4 shot of the characters. Write up some notes of how it’s affected.

Rubric:
Does it look like the same person for all seven days?
Does the head shape and design for all the positions look like it’s the same form over the 7 days.
Do I understand the characters thoughts and feelings with greater depth.
Can I write a 100 word biography of the character now?