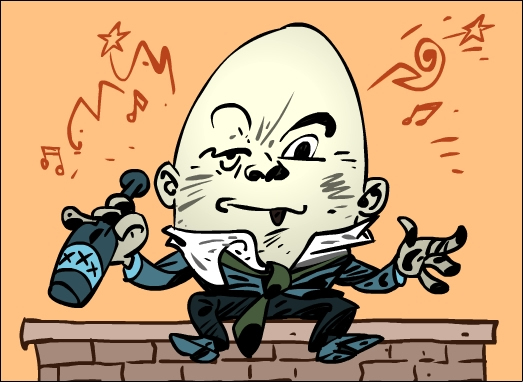 Comics can seem like a perfect objects, egg like, unbreakable little masterpiece, freshly popped from a chicken. But to be a creator you need to read differently. Any comic, can be a useful, if you can discover the craft of it’s making. So you need to kill Humpty Dumpty. Break that perfect egg into tiny little pieces so you understand how it’s made.

As a kid we start by copying someone else’s work. To often it’s the cool pin-up shot, the gross out parody, the dramatic single image. Pick an image, lift it directly from one artist insert it into your own work, claim it as your own. That’s a swipe. Is it possible to do something other then a swipe?

If you break apart the work like it’s Humpty Dumpty? You can turn your work into a nice omelette, tasty and transformed into something greater then the simple egg.

If your visual, it’s always easiest to start with copying. 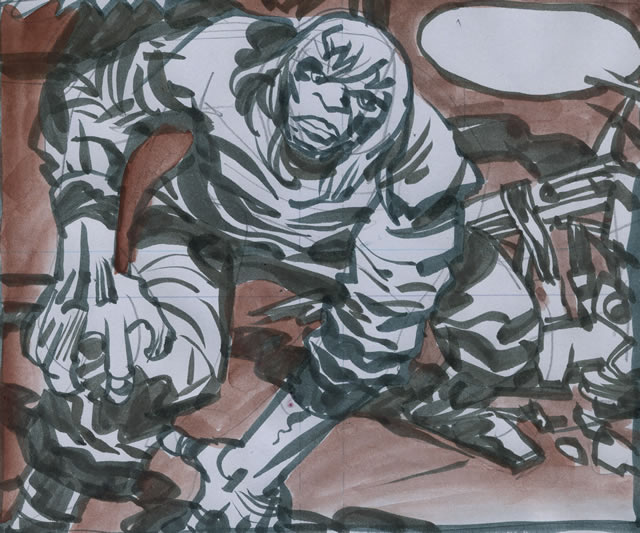 There’s a book, Rembrandt and the Italian Renaissance by Kenneth Clark that outlines Rembrandt’s practice of swiping from all sorts of artists.

Rembrandt and the Italian Renaissance

It’s a study how Rembrandt didn’t just swiped but took things from a wide variety of sources to make his own work. It’s a process that you could follow with almost any great artist.

So in building a practice plan we step outside of just swiping. The goal is to to find the craft underneath the art. That craft is what makes the actual thing we are looking at. Pull apart the work and you can find gems in any artist.

To break the comic apart you need to smash it against a wall, figuratively. Drawing makes you look and is a challenge to the skill of duplicating shapes. But writing frees you to ask questions about the work from a different perspective Writing about the work can take you out of using your well developed art skills.

How to write about Comics

Write short sentences, one sentence to a line. Make each sentence clear. Start with reporter 101 questions, who, what, when, where, why and how. As you answer the questions you’ll write a description of the comic.

Why ask the questions first? Because the questions will change the way you look at the work and make you think outside of your personal taste.

Personally I’m obsessed with the way your eye moves from panel to panel in comics. I look first at how the compositions do or don’t fit together in comics. That’s why I’m happy drawing abstract comics. I can read Peanuts, as an exercise in formal design, very happily. But that’s a very limited reading of a great comic strip.

In this strip I first described it as an exercise in visual design. Horizontal compositions across three panels that lead you into a vertical upright in four. That’s the art setup. But then ask the question, why is Snoopy lying down? Because he’s obviously one cool cat who doesn’t have to jump up and down at his “master”. Compare the relaxation of the first three panels with two days later where Snoopy is paying attention to Charlie Brown with interest.

The question “Why is Snoopy lying down?” leads to interesting thoughts about his personality and reactions. His calm cool non-reactive pose makes the alertness of his Shakespeare quote even funnier. Asking the questions led me away from my first and usual reaction to the pages. It led to discovery in a way I wouldn’t normally think.

The Basic Questions of Destruction

What
What is the art made out of? It’s not just the physical tools. But look at the the actual stuff of line shape and color. The weight of the line should reveal as much about the story as anythng else in the panel.

As you write look for the intersection of story, script and pictures in making the comic.

When
What’s the time involved in the story? How long is it? How long is spent on a scene? If the trap at the end takes 4 panels is that as important as the guest characters taking 3 pages talking?

Because your thinking of comics where and when are related. Time is controlled by the space on the page and where you put things. You have a scene, when does the artist break the scene into panels? When do characters appear in what way as they move across a sequence of panels?

When you look at the work ask what do you see first? Why do you see one character before another?

When do you put all the separate images into a whole sequence? When do you understand the drawing?

Where
Where are the images placed in the panel? Dividing any image up into a grid gives you a basic composition. Can you describe major shapes on the page that control how your eye moves? Where are the characters standing in three dimensional space versus two?

Why
Use you imagination to enter into the artists mind you are looking at. Like a five year old child, ask why of everything? Why are these shapes here and not over there? Why did these figures get silhouetted on panel 3 page 16?

How
How is representation handled? Cartoony? Completely rendered? Cross hatching or fluid brush lines? How does it work? How big is it? How are you shown things? How important is this part “hand, fabric, shadows” to the drawing? How does it make you feel?

I’m talking about a different kind of writing then the usual comics criticism. Most critics write so they can discuss Batman, black leather and bondage. (And yes, comics critics who can’t describe the drawings aren’t worth much) This is looking, reading and writing to find the craft of making comics.

Comics include all the skills of visual and literary arts. So if you just do literary analysis of a comic your not talking about comics.

The Power of the pieces

Drawing makes you consider the work in one way, description forces you to look in another mode. Making the words work is one more way to force your brain out of, “Holy shit mode”. This is about slowing your process in your brain and steppingout of the role as a reader. All art is about making a choice.

In describing the work your following a pattern of choices that the creator made. Your outlining what they did that you think is important. The goal is to define skills that can be isolated worked on and improved.

Write 100 words on how simple practice plans from the previous post. Focus on what is working, what do you do that makes things easier to work with.
2.1 Revision
Looking at the three games you created for yourself in 1.1, take the one that worked the best, what worked and see how you can apply it the game that worked the least.
2.2 Artist Study
Pick an artist your interested in.

Write out all the questions you can think of for the work.
Answer the questions
Don’t stop until you have 500 words.

Set a timer for twenty minutes.
List all of the skills you think are involved in drawing a comic book.
Look at your three artists.
List any skills they have that you do not.