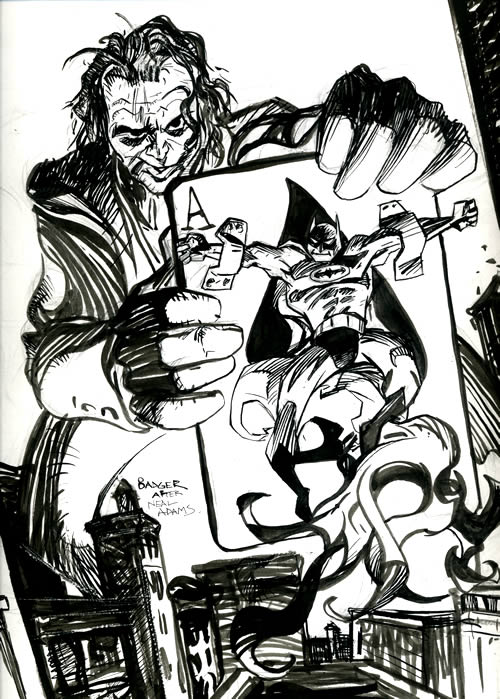 This is a drawing for the Kid’s school auction, confronted with the “kids these days don’t think batman is cool”, heck kids these days don’t read American comics and feeling my hip cartoonist self fading off into irrelevancy I asked The Kid what to do for the auction. He suggested the Joker from the movie, not the comics Joker, certainly not the real Joker, Cesar Romero.

So I used his suggestion as a chance to swipe an old Neal Adams cover Detective ? at url. Neal was the first artist I recognized as cool, the first artist I started looking for his work on the racks. he had a very graceful feel to his figures, did well etched muscles, ad had hands clenching things with the best knuckles. I never could swipe his knuckles very well.

So I tacked Heath Ledger’s head on top of the cover and redo everything else within the context of my world. Over on Facebook Stephen DeStefano was quizzing Walt Simonson about the coolest Batman comic ever that Walt did. We had a little discussion about what make Walt’s Batman weird and mine weirder.

Neal’s drawing grew out of strip art and commercial illustration of that time, he figured out how to put some Kirby dynamics under that traditional rendering and made something feel new but recognizable. Walt who’s work is totally based in Kirby overlayed by a sure design sense, trained by art school (before they taught comics in art school) with a line that feels fresh and bouncy, with all sorts of weird visual art history references thrown, came out of left field. So he’s seen by the traditionalists as weird.

My art school training pushed me even further afield, I was even less concerned with the iconic or traditional styles and drawing was that gestural physical act for me. I wasn’t interested in referencing Steadman or Baron Storey or any other illustrators that were considered appropriate, I really thought you should draw your own way, so comics people look at me as totally from “another fucking planet” as Mr. Chaykin said.

These days it’s easier to go “Yup, my drawing is from another planet”.