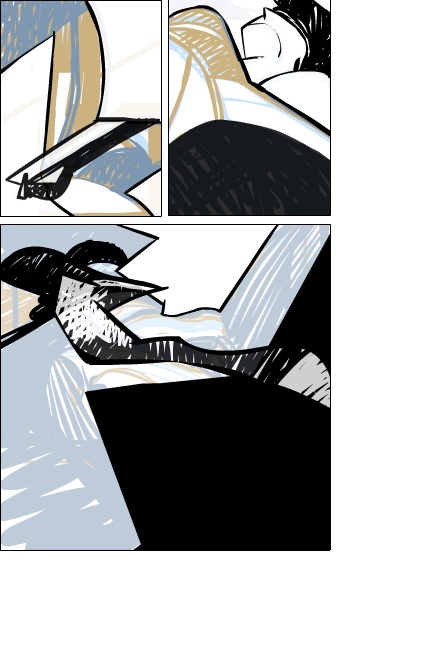 So I have a style, as Chaykin says “I draw like I’m from another planet”, Stephen DeStefano says “I don’t draw like anyone else”. what I’m looking for is a way to codify my drawing develop a set of patterns in creating the work that allows me to develop the drawing in a way that I’m interested in that isn’t just re-working Jack and reworking Matisse or whoever. In art school you draw from the gut, technique meets that point where you throw out what is right and do what is “wrong” because it feels right.

That’s so easy to say and it’s easy to do and often people congratulate themselves on doing what they feel is right. Often “what’s right” is used to swear, fight, and hurt because of course “What I feel is right”. In Buddhism right is what doesn’t hurt other people, doesn’t do harm. There’s a long line of moral and ethical code behind your actions, in art who cares about morals? And often we think living is art.

After 24 pages I want to build some patterns for myself in drawing that I can use as boundaries to draw against, rules to follow and break. Patterns like computer patterns like making fabrics. Writing patterns is like making rules to break and creating your own moral code for making art.

One reply on “Can abstract sex be “good””

While I still enjoy drawing for its own sake, this ‘codification’ in a sense of my own style I’ve attempted to do–because I realize that I want to TELL STORIES and my drawing actually is the slowest part of the process in a sense. It’s a weird little dichotomy (if that’s the right word) wherein I realize that doing comics is maybe more important to me than the drawing. So…how to turn the drawing into a component that is always reliable and consistent (and quicker) is sometimes the goal.

Bah! Why is it that the things I’m interested in are never the things that generate cash, fame, and glory? Drawing? Comics? Selling comics online? Playing tennis? And lately…doing magic tricks with cards!! !@##$%!!